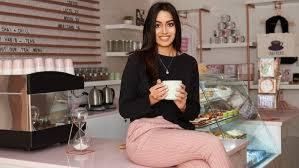 Tania Lodi is the founder of Tania’s Teahouse. Voted as the 7th most Instagrammable café in the world and the only Cafe to have made the list from the UAE.  she has become a key player in the region's foodie scene. Born in New York City she spent her younger life moving from state to state. From California to Texas and Missouri it wasn’t until2005 that the Pakistani nation relocated to Dubai with her family. Attending the Dubai American Academy, she then moved to Canada where she completed a Bachelor of Honors in Psychology at the University of Toronto. This is where her love for café culture began. Suffering from a chronic pain condition during this time, she looked to tea for its wondrous health benefits. Learning that many people were also dealing with similar health problems alongside personal and social issues, she wanted to create a space for them, incorporating tea in a fun and healthy way. Following her bachelors, Tania Lodi took a course in mindfulness writing a dissertation of the effects of positive thinking, it inspired her theme of positive-tea

Other shows to explore